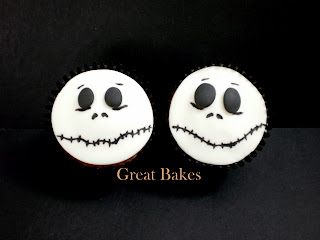 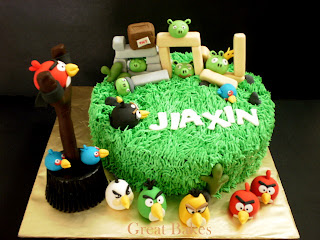 I've tried this game several times and just don't get it. Little Miss and Young Master on the other hand are very good at it. Though I've been told, they not actually that good because they haven't even gotten past the first level!! To be fair, they hardly get to play the game much less touch my phone... Apparently, children younger than mine ace in Angry Birds. Like this child. He's turning 4 this weekend and his uncle (and aunt-to-be) wanted to meet his request for an Angry Birds cake. I spent the whole day working on the birds and pigs! Didn't help that it was pouring yesterday evening and they all started to get shiny and sticky. So, I had to turn on the bedroom air-conditioning to keep them dry...decorating during the monsoon season is getting to be really expensive!!! 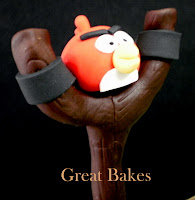 The Red Bird (I think that's what it's called) on the catapult. 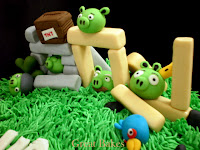 The Green Pigs amongst the broken structure. 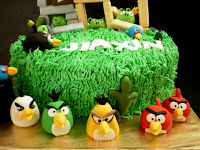 The rest of the attack birds waiting for their turn.

I understand that different levels have different structures and birds and what nots but I decided to stick to the basic idea of Angry Birds. Birds vs Pigs period. Covered this 8", 1.7kg Vanilla Butter Cake in green buttercream using the grass tip. Needless to say, I had carpal tunnel syndrome after that.
Posted by dee.g No comments: 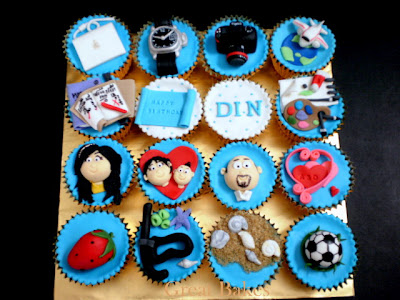 These 16 Lemon Cupcakes on the other hand was for her husband. All of his favourite things and I was especially pleased with these two- a watch and a Canon camera! Not bad, eh?

Posted by dee.g No comments: 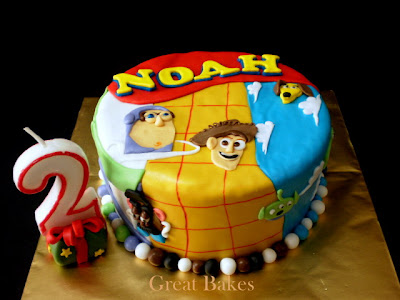 This was a last-minute cake but here's the thing, I had the honour of doing Noah's 1st birthday cake last year (Pocoyo and friends). I almost turn this down because I had lots to do this weekend and I was under the weather. But mummy was an old friend and all she wanted was a small and simple 2-D Toy Story cake. Well, yours truly can't SIMPLY do a cake even if I wanted to!! Of course, I gave it some thought. It's a small cake (1kg Devil's Food) and I wanted it to be impactful although it was 2-D. So, I decided to do colourful swatches that'll attract 2-year olds - Woody's shirt, Buzz Lightyear's uniform, the bedroom's Clouds wallpaper and the movie's logotype background in red that featured Noah's name in yellow and blue. With a couple of cast cut-outs, I thought the cake looked attractive and adhered to the theme. 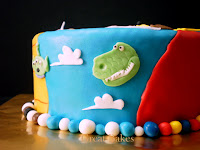 Posted by dee.g No comments: 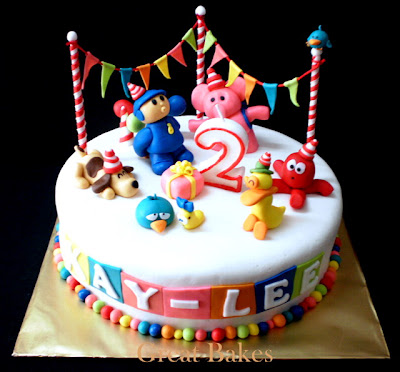 Oh I love this cake!! I really do. Little Kay-Lee had a cake of toy blocks last year for her 1st birthday and this year, she's into Pocoyo. The last few Pocoyo cakes I did were for boys and I was pleased as Punch to be doing one for a girl. Mum asked for a pastel pallette but Pocoyo and friends are mostly in strong and bold primary and secondary colours. It's the beautiful educational-part of the programme to be introducing these colours to toddlers and I also kept to using white as the base colour as is in the series. I checked online for an episode of Pocoyo with a party-theme (there's usually one episode in every toddler educational programme, trust me....I've done my time with these series with my two), and that's how this cake was designed. 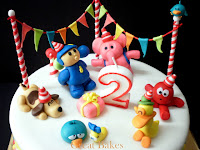 I've always loved having Pocoyo help blow out the candle, so I had Pocoyo in the same pose and all his friends donning party hats. I was particularly happy with how the candy cane poles and party buntings turned out. They really gave the cake a party atmosphere. I also added 2 characters which were not in my previous cakes - the red Octopus and the small bird on the pole. Everyone's out to celebrate Kay-Lee's 2nd birthday!! This 9" Devil's Food Cake finished weighing a hefty 2.5kg!
Posted by dee.g No comments: 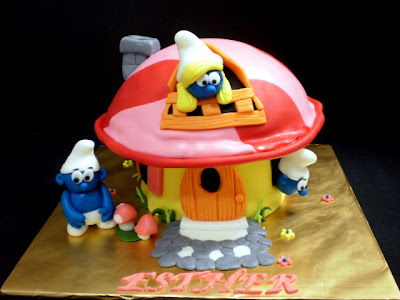 Gosh, I was really reluctant to do Smurfs for the fear of turning them into goblins! But on hindsight, they are technically goblins aren't they? Blue goblins who happen to be irritatingly happy all the time except for a couple of them... Anyway, the client wanted a small cake for a 40-year old fan and I decided to do build a toadstool house out of Lemon Poppyseed Cake. I didn't really focus on specifics when it came to the 2 male Smurfs since they all look alike but I did do a Juliet-like scene with Smurfette on the balcony. A surprisingly simple cake weighing only 1.2kg, though I think I'd go mad if I had to make more Smurfs for a bigger cake. Something in the blue that doesn't agree with me nor do I find them cute.
Posted by dee.g No comments: 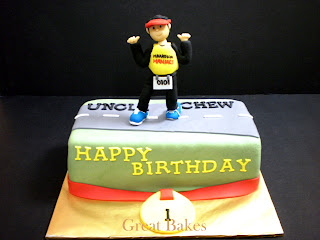 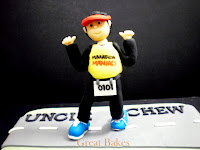 What a great testament to embracing your golden years with gusto! This "young man" is in his 60s and is a self-proclaimed Marathon Maniac. He travels the world to participate in marathons and as he celebrated his birthday the night before with a couple of thoughtful friends, he leaves the next day for Sydney to another race. He was in awe of this 1kg Lemon Poppyseed Cake depicting, in his words, a younger version of him!!
Posted by dee.g No comments: 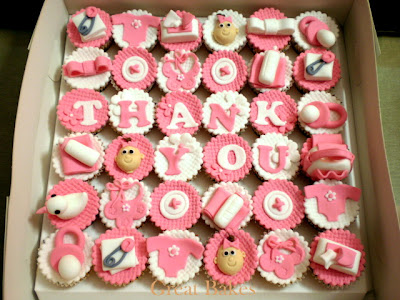 These Lemon Poppyseed mini cupcakes were customised for the client's ob-gynae for the services rendered during the birth of her baby girl.
Posted by dee.g No comments: